Free Copies of Classic Issues of HerbalGram for University Classes
Because education is the key word in the American Botanical Council’s mission statement, one of ABC's goals has always been to share the information in HerbalGram with those who might not have ready access to it. One way that ABC accomplishes this goal is by offering free copies of classic back issues of ABC’s peer-reviewed quarterly journal to university classes in topics such as ethnobotany, economic botany, pharmacognosy, ethnopharmacology, and related plant sciences. ABC encourages all university, pharmacy or medical school instructors and/or students who believe that their curricula might benefit from reading HerbalGram to contact ABC about free copies at education@herbalgram.org.


March 1: Lloyd Library Initiative Historical Research Center for the Natural Health Movement. Cincinnati, OH.
The American Botanical Council’s Founder and Executive Director Mark Blumenthal will present a speech titled “The Importance of Documenting the History of the Natural Health Movement.” Lloyd Library is launching a new initiative to establish the Lloyd Library and Museum as the principal repository worldwide for the archives and personal papers of all individuals, groups, organizations and associations, schools and colleges, businesses, etc. involved in both scientific and grass roots endeavors to bring natural health into the mainstream. For more information, please visit www.lloydlibrary.org/hrcnhm.html

*Social highlights include a fabulous networking reception hosted by Chromadex and the gala banquet with dinner speaker Mark Blumenthal. Be part of this International Research Celebration! To find out more about this exciting conference program, please visit the Web site at http://www.nhprs.ca/. Register before February 20th to take advantage of early-bird savings on conference fees and to access special hotel room rates.

Watch for a special communication from ABC about the next Pharmacy from the Rainforest ecotour to the Peruvian Amazon and the "lost city" of Machu Picchu in the Andes Mountains.

The benefits of both cranberry and hawthorn extract have been receiving much attention in the news during the past few weeks, particularly in light of 2 Cochrane Collaboration reviews published in late January. These reviews found that randomized, controlled clinical trials support the benefits of cranberry for preventing urinary tract infections in women and the benefits of hawthorn leaf with flower extract for improving cardiac performance in patients in the early stages of heart disease. This is positive, timely news about respected traditional herbal medicines.

The new issue of HerbalGram (#77) is now online! 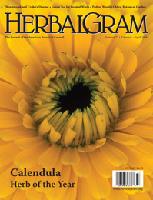 All the Buzz
Though energy drinks are rising in popularity, they may do more harm than good due to high levels of caffeine, salt, and possibly harmful ingredients, at least according to this writer.
LeBlanc, Pamela. All the Buzz. Austin American-Statesman. January 22, 2008.

The current HerbClip bin was released on February 15, 2008. Two samples have been made available online to all members:

Effectiveness of Devil's Claw Preparation for Arthritis and Other Rheumatic Conditions

Potential Therapeutic Efficacy of Slim339, a Proprietary Fixed Combination of Malabar Tamarind, Calcium Pantothenate, and Four Other Extracts for Obesity