Two weeks after Hurricane Sandy, much of the Northeast United States continues to recover and rebuild, including many botanical organizations and businesses. An article in this issue of HerbalEGram provides information on the post-storm conditions of these groups, such as the New York and Brooklyn botanic gardens, and what readers can do to help with recovery efforts.

This story and additional pieces — including articles on Ginkgo biloba for Alzheimer's disease prevention and a man's herb-related attempted fetal homicide charge in South Dakota — are available in the Recent News section below.

The American Botanical Council, which just entered its 25th year, recently published a new issue of HerbalGram featuring an article investigating the adulteration of commercial bilberry products, as well as two letters-to-the-editor. 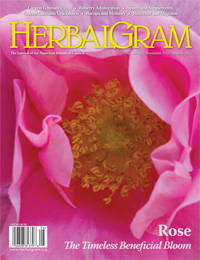 The Adulteration of Commercial Bilberry Extracts

Let Thy Food Be Thy Medicine: Plants and Modern Medicine by Kathleen Hefferon, published in 2012 by Oxford University Press. The featured excerpt includes the book’s title page, table of contents, and Chapter 1, “Plants and Human Health.”

Hefferon presents an overview of the process of identifying plants with healing properties and turning them into useful and accessible medicines. The book begins with a brief history of medicinal plant use and continues with discussions on the process of locating medicinal plants in the wild, modern analyses of phytochemicals, and the development of plant-based drugs.

Red Wine Compound May Not Help Healthy Women. WebMD.com. 10-25-12. A recent study failed to show benefits in heart disease or diabetes prevention from resveratrol supplements in healthy women in their late 50s and early 60s.

“Landmark” Medical Marijuana Dispensary Ruling May Hurt Feds. SF Weekly Blog. 10-25-12. A San Diego appeals court ruled that a man previously found guilty for selling marijuana should have been able to use in his defense the California state law legalizing medicinal marijuana.

Quaker Thrives in China with Traditional Medicine Cereal Fortification. Bakeryandsnacks.com. 10-16-12. To expand the appeal of Quaker oats in China, some products now feature traditional Chinese medicine ingredients such as red dates for replenishing blood and white fungus to clear the lungs.

US Supplement Use Remains Strong, CRN Survey Says. Nutraingredients-USA.com. 10-8-12. The recently released results of the 2012 CRN Consumer Survey on Dietary Supplements show that more than two-thirds of Americans use supplements.

Council for Responsible Nutrition (CRN) Calls on US Food and Drug Administration to Reverse Its Current Position on Synthetic Botanicals.Press release from CRN.

Ginkgo and Alzheimer's Disease. By Tyler Smith. Recent results of a large clinical trial on ginkgo for Alzheimer's suggest that the herb is better suited for the treatment — and not prevention — of the disease and its symptoms.

Hurricane Sandy's Impact on the Botanical Community in Northeast US. By Lindsay Stafford Mader. Botanic gardens and herbal companies along the East Coast sustained damage from Hurricane Sandy, and several are welcoming donations to help with the recovery process.

Man Suspected of Administering Herbal Abortifacients in Attempted Fetal Homicide Case.By Ash Lindstrom. Though the victim of this alleged crime delivered a healthy baby, a former boyfriend is being accused of spiking her drinks with an herbal abortifacient such as pennyroyal.

FDA Delays Decision on Crofelemer for Second Time. By Lindsay Stafford Mader. The FDA again has delayed its drug-approval decision on this Croton tree-based medicine for chronic diarrhea.