Though the summertime is typically a slow news period, many important herbal developments have taken place in recent months. As discussed in an article in this issue of HerbalEGram, a Chinese medicine manufacturer, whose andrographis product is being studied in clinical trials, was selected by the Wall Street Journal as a finalist for the paper's Asian Innovation Awards. Another article reports on the recent European E. coli outbreak and its impact on the fenugreek industry.

Additional articles in this issue profile 2 interesting herbal projects: the dyeing of fabric with medicinal ayurvedic plants—a process referred to as ayurvastra—and the Sacred Seeds garden network, which will soon include a garden at ABC's headquarters in Austin, Texas. 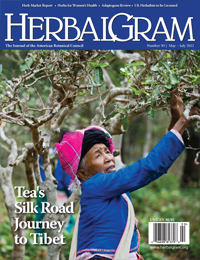 the Southwest Silk Road to Tibet, accompanied by gorgeous, full-color photographs. The issue also includes a review of adaptogenic herbs, from early research conducted in the former USSR to contemporary studies on these “stress vaccines.” In addition, this issue features an update on standard reference materials for the analysis of dietary supplements, as well as HerbalGram’s annual Herb Market Report.

September’s featured book excerpt comes from Psychedelic Healing: The Promise of Entheogens for Psychotherapy and Spiritual Development, written by Neal M. Goldsmith, PhD. Published by Healing Arts Press earlier this year, this book boldly explores the use of psychedelics as a potential clinical tool for psychotherapists and psychiatrists. Dr. Goldsmith also discusses the supposed personal and spiritual benefits of these stigmatized drugs. The excerpt selected for readers of HerbalEGram includes the book’s title page, table of contents, and Chapter 4, “The Ten Lessons of Psychedelic Therapy, Rediscovered.”

Valerian May Aid Menopausal Sleep Problems. Reuters. 8-30-11. A recent study in Iran found that women taking a valerian supplement experienced a higher rate of increased sleep quality than those who took the placebo.

Chinese Doctors Call for "Cruel" Bear Farms to be Closed. The Telegraph. 8-28-11. TCM experts in China are criticizing the country's bear farms and promoting the usage of botanical alternatives to bear bile.

Chinese Herbs Equal to Tamiflu in Reducing H1N1 Fever. US News & World Report. 8-15-11. The recent conclusion of a study in China shows that a traditional Chinese product containing 12 herbs reduced fever as well as the conventional drug Tamiflu.

Professor to Test Interaction of Herbal Supplements and Prescriptions. Missourian. 8-15-11. A biochemist at Missouri University is creating a test based on natural hormone levels in body fluid to determine if a supplement will interact with medications.

The US Food and Drug Administration Extends Period for Comment on its New Dietary Ingredients Draft Guidance. Notice from US Department of Health and Human Services.

Chinese Herbal Medicine Manufacturer Selected as Finalist for Wall Street Journal Awards. The American news organization chose this Chinese company as a finalist in the annual Asian Innovation Awards due to its andrographis product that is currently being studied in clinical trials.