With cool fall weather upon us, we can all manage to go outdoors more often and be inspired by nature, like W.S. Merwin, the recently-appointed US poet laureate who is profiled in this issue. Not only does Merwin write poetry about plants, but he also works passionately to conserve palm trees on the Hawaiian island of Maui where he lives.

An additional article in this issue discusses a Traditional Chinese Medicine (TCM) product containing Chinese salvia that recently cleared US Food and Drug Administration (FDA) Phase II clinical trials, raising the possibility that it could become the first TCM product approved as a drug by FDA. Another article discusses a recent study in Italy that found a product containing curcumin from turmeric can relieve osteoarthritis symptoms.

The American Botanical Council, meanwhile, is preparing for its first-ever botanical medicine trip to Vietnam. The 16-day tour takes place from January 18, 2011 until February 2, 2011, and will include visits to traditional sites, medicinal herb shops, fruit and organic tea plantations, vegetable farms, and much more.

HerbalGram 87 includes a review of the 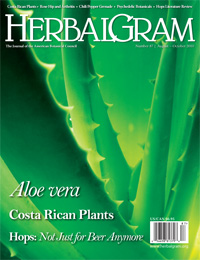 historic and current medicinal uses for hops, highlighting the plant’s value beyond beer production. The issue also features an excerpt from the 2009 book Plants of Semillas Sagradas: An Ethnomedicinal Garden in Costa Rica, as well as a detailed profile of aloe’s historic uses and modern research. Additionally, the issue contains reports of 2 recent conferences pertaining to medicinal plants, one of which examined conservation concerns while the other explored research into botanical psychedelics. 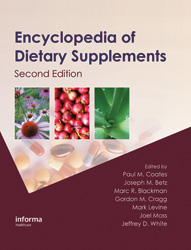 October's selected book excerpt comes from the Encyclopedia of Dietary Supplements, second edition, edited by Paul M. Coates, Joseph M. Betz, and additional leaders at the US Office of Dietary Supplements, and published in 2010 by Informa Healthcare. This excerpt contains the book's title page, table of contents, preface, and chapter on elderberry. All are available here.

Pushing For a System to Track Plant Origins. Livemint.com. 9-28-10. Some Ayurvedic companies in India are calling for more national regulation on the collection and trade of herbs, aiming to improve their ability to track the origins of the plants used in their products.

Soy Supplements Effective as Hormone Therapy. FoodConsumer. 9-20-10. According to recent research, a supplement containing soy isoflavone is as effective as hormone replacement therapy in easing menopausal symptoms in post-menopausal women.

Forest Lovers Plant Their Way to UN Assembly. Daily Nation. 9-20-10. Thirty African villagers have been chosen to receive a UN award for their project that encourages the growing of indiginous medicinal plants to ease pressure on forests.

Rival Candy Companies Both Parse Cocoa’s DNA. New York Times. 9-15-10. Competing companies Mars and Hershey are both claiming to be the first to have determined the complete DNA sequence of the cacao tree, which produces cocoa beans that are used to make chocolate.

Herbs, Omega-3s Can Save Millions in Healthcare. NutraIngredients. 9-15-10. According to a recent Australian study, herbal supplements and Omega-3 supplements could save the country $50 million each year from decreased spending on treating depression.

UK Approves Valerian Sleep Aids. Nutraingredients. 9-9-10. Under new EU regulations, the United Kingdom has approved 4 oils containing valerian based on their history of traditional use.

Research Shows Marijuana Relieves Chronic Pain. WebMD. 8-30-10. A recent clinical trial has found that inhaling 3 puffs of cannabis each day can ease pain and support sleep in those who have chronic nerve pain from an injury or surgery

Royal Botanic Gardens, Kew, the Natural History Museum in London, and the International Union for Conservation of Nature (IUCN) Find 1/5 of World's Plant Species At Risk of Extinction. Press release from Kew.

Co-Founder and Executive Director of the Center for Science in the Public Interest (CSPI), Michael Jacobson, Awarded with 2010 Hero Award from the US Centers for Disease Control and Prevention (CDC) Foundation. Press release from CDC Foundation.

17th US Poet Laureate W.S. Merwin: Passionate Palm Conservationist. At his home in Hawaii, the new US poet laureate spends his time working toward the conservation of palm trees while being inspired by nature.

Special Turmeric Curcumin Formulation Relieves Osteoarthritis Symptoms. A recent Italian study has found that a standarized extract containing curcumin from turmeric and a specific type of phospholipid relieved osteoarthritis symptoms in most participants.