On June 25 the U.S. Food and Drug Administration published final regulations for Good Manufacturing Practices (GMPs) for dietary supplements. The new rules are almost 13 years in the making, having been authorized by the Dietary Supplement Health and Education Act of 1994 (DSHEA). The new GMPs will guide manufacturers to help ensure that dietary supplement products in the U.S. market contain ingredients that are properly identified, free of contaminants, that the products are labels accurately, and stored properly - with appropriate testing and record-keeping. The new rules will go into effect in 1-3 years, depending on the size of the manufacturer. The establishment of these baseline requirements for manufacturing processes will hopefully help boost consumer confidence in this important category of products. Our article on this major regulatory development ("FDA Publishes Final GMP Rules for Dietary Supplements") provides more information about the new rule as well as comments from various experts and industry leaders. 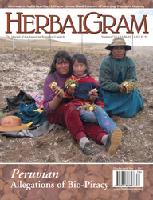 HerbalGram 75 will be mailed on July 27. Featured articles include:

Safeguarding the Seeds of Native Plants: A Review of Germplasm Collection Efforts and Conservation Potential
by Megan Haidet, Mary Byrne, and Joe-Ann McCoy
Botanists, biologists, and other researchers in the United States are collecting and preserving the seeds of native plant species, including medicinal plants. By storing and protecting native germplasm, researchers hope to conserve plants’ genetic material so that they can maintain and restore native landscapes more effectively.

Peruvian Maca and Allegations of Biopiracy
by Josef Brinckmann
Peruvian scientists and government officials are trying to prevent “biopiracy” of the traditional Peruvian food and medicinal plant—maca. The Peruvian government is attempting to challenge several maca-related patents filed in the United States and Japan, which officials suspect could potentially affect exports of maca products from Peru. The author discusses the ethical and legal ramifications of biopiracy and the challenges that Peru faces in protecting its traditional botanical knowledge and resources.

Grattis! Carl Linnaeus
by Paul Alan Cox, PhD
May 23, 2007, marked the 300th anniversary of the birthday of pioneering taxonomist Carl Linnaeus, renowned for establishing the binomial nomenclature system of naming plants and animals, for his passionate teaching methods, and for his lasting contributions to ethnobotany, among other feats. The author provides a first-person account of his experiences at the recent celebrations held in Sweden in honor of history’s most famous and revered botanist.

July 14 - 18: The 48th Annual Meeting of the American Society of
Pharmacognosy. Portland, ME.

The latest HerbClip summaries and reviews were published on ABC's website on June 29. HerbClip Online is available to ABC members beginning at the Academic Membership level. Two samples have been made available on our website to all visitors.

In addition to the online posting, ABC offers the HerbClip Educational Mailing Service, which is also published twice monthly and provides printed copies of reviews/summaries along with the original articles (in most cases). This unique educational benefit is available at the Sponsor Member level. For more information, please contact Aileen Truax by email or by phone at 512-926-4900 ext. 120.

XanGo Documents its Humanitarian Efforts on the Web